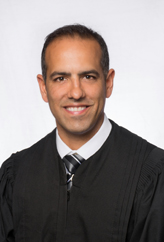 Judge Michael E. Servitto graduated from Warren De La Salle Collegiate High School. He received a BA in Political Science from Michigan State University, and graduated Magna Cum Laude from Michigan State University-Detroit College of Law. During law school, he was a member of King Scholars Program, and was elected Note and Comment Editor of the Law Review. Judge Servitto began his legal career as Clerk in the Tort Defense Division of the Michigan Attorney General’s Office. He also worked as a Law Clerk for Judge Mark Switalski and for the Warren City Attorney. Judge Servitto worked for the Macomb County Prosecutor's Office from 2003 to 2016 as principal trial attorney and also served as Chief of the Cold Case Unit and Chief of the District Court. He received the Most Outstanding Young Lawyer Award from the Macomb Bar Association, and was a Mount Clemens Planning Board Commissioner.